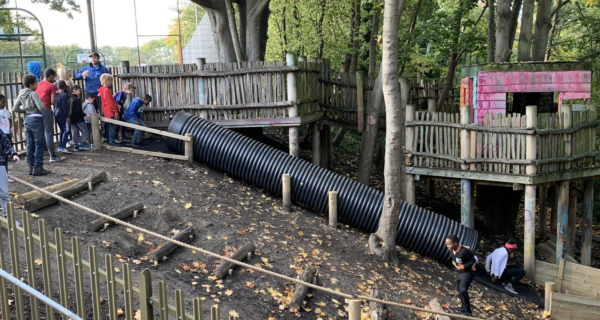 Finally… The time has come! Dare you ride the super slide at Cape Adventure Playground?

Sure, you’ve been down the awesome six-metre slide (10/10 rating), but will you survive the 12-metre slide? For as long as Cape kids can remember, the adventure playground has been missing a certain something. They’ve been searching far and wide, from the shores of the west, to the northern hills far, far away. Their quest, to find a sturdy vessel that allowed them to slide from the heights of the trees to the valley of Parkland Walk.

Many kids tried to simulate the feeling by using different techniques and equipment. Some were successful, some… not so much, but they kept on trying and believing that one day that dream would come true.

Then, back in September, a team of fantastic volunteers heard about this quest and decided they would travel to Cape to help. Bringing along their tools and willpower, they worked all day and night to help the Cape team build the foundations for this difficult task. With the howling winds and ferocious weather beating down onto the playground, causing all sorts of problems and chaos, the team battled on valiantly.

We can now proudly say that the search is over; no more sliding on cardboard, no more bin lids (unless adventurers want to of course)!

With one six-meter slide complete and in full action and the other 12-metre slide just over a week away from completion, soon Cape Adventure Playground will be the proud owner of not only one, but two magical slides!